World of Fire in Numbers (Part 1)

People know fire accidents can happen but usually feel that the chances of it happening to them is minimal and fail to make the necessary preparations to protect themselves and their belongings.  There is little to salvage after a fire has happened and more or less belongings are lost forever and the most only regret that they should have been prepared when it is already too late.

Fire statistics are published by most countries, but most people are ignorant of these numbers as more often or not, they feel they are not going to be affected. Therefore, at Guarda, we are going to look at fire statistics to show you how real and close a fire can be. The Center of Fire Statistics (CFS) of the International Association of Fire and Rescue Services (CTIF) present various fire statistics from around the world and publish it in an annual report. We will use these statistics to look through a series of data to draw some comments, so that people can understand and better relate to the impact and the chance of a fire happening to them. 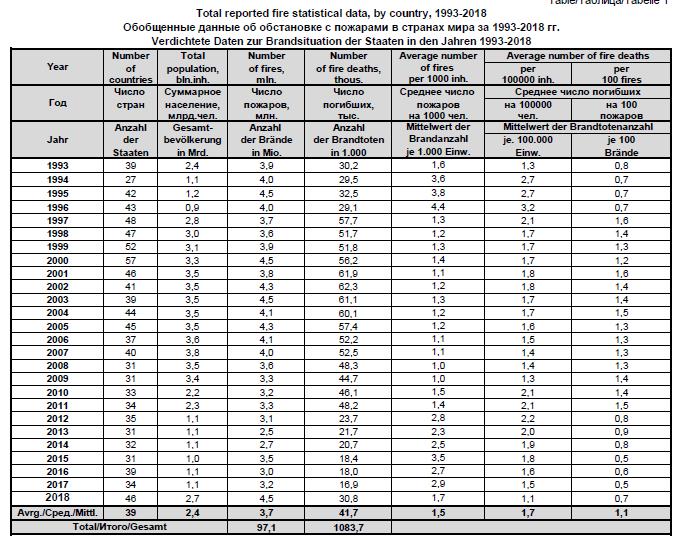 In the table above, we can see historical data of some key statistics from countries that have submitted their numbers for the report. The numbers are staggering. On average from 1993 to 2018, there were 3.7 million fires around the world that has caused nearly 42,000 directly related deaths. This is translated to a fire occurring every 8.5 seconds! Also, we can see that there is an average of 1.5 fires per 1000 people. This is like at least one fire each year in a small town. Imagine these numbers only account for less than one-fifth of countries around the world and for about a third of the world’s population. These numbers would be even more staggering if we could collect statistics from all the countries.

Looking at these basic statistics, we should never take fire precaution lightly as the chances of a fire big or small could be just round the corner, lurking to take away everything that cannot be replaced. Therefore, only being prepared is the smart choice that everyone and every family should make. At Guarda Safe, we are a professional supplier of independent tested and certified, quality Fireproof and Waterproof Safe Box and Chest. For a small outlay compared to the priceless items that you treasure, it is a simple choice in order to protect the irreplaceable because once it lights up, it would truly be gone forever. In the next part we would look at some of the common types of fire in those statistics presented.

Protect what matters most

Chat Online 编辑模式下无法使用
Chat Online inputting...
Hell, we will get back to you ASAP.

Hello, please leave your name and email here before chat online so that we won't miss your message and contact you smoothly.